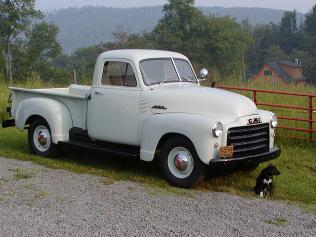 “Hey Jim what’s up with you?” and with that prompt I would go off about our 1952 GMC pickup. How it was progressing, what was the latest problem I was dealing with, when I would or could be done with it, or any number of subjects that could pertain to “the truck”.

I could bore the daylights out of anyone who was only casually interested or captivate someone who actually knew what I was talking about. The latter are few and far between and usually want to talk about their own projects.  IMAGINE THAT!

In this article I hope I can bring some measure of interest to anyone who gets past the title and actually reads it. 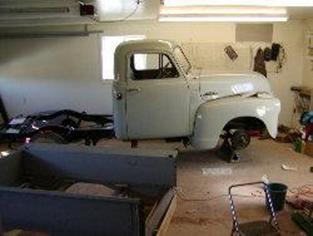 Early thoughts of the truck started  around 1980. My wife, fiancé at the time, and I always liked old vehicles. I hadn’t owned a car for quite some time so the decision to start looking for a truck was fairly easy. We watched the local papers and one day an ad for a 1953 GMC pickup jumped out at us. Actually, as I found out later, the truck was made in September 1952 and probably sold in 1953. There were no dates on titles back  then.  We called and made an appointment to see it. We were warned that the truck hadn’t run in quite a few years so we were a little skeptical of the condition of the rest of it. When we arrived an older woman answered the door and explained that the truck had been her husbands and he had been deceased for some time. Her son showed us to the garage (I use the term loosely because the garage was more like a cross between a chicken coop and a pile of boards) We were pleasantly surprised when he pulled open the door, the dust flew and there sat this truck.

You could tell it had been there for a long time but it had all of its faculties, no dents and very little rust (I couldn’t see any but there’s always rust on a 30 year old anything). We bought the truck for $700 and hauled it home, without hearing it run. There were people coming later that afternoon so we had to act fast.

It started as soon as we gave it a little pull. We decided to drive it for a while since it ran so well. We painted it without doing any prep work except for a little putty and wet sanding. The previous paint had been applied with a roller so our quick job was poor cosmetics at best. It was great though to enjoy the ride for a while before we started the restoration.

It’s hard to say just when we started, what year I mean. The years just seem to run together. I’d say before 1990 we had most of the truck apart. The first picture is the only picture of the truck we have before it was completely taken apart. We had an outbreak of Gypsy Moth caterpillars at that time. It was most unpleasant and the picture was taken of that and not the truck.

Some of the next pictures tell just what we were in for. Small holes in the cab corners that I thought were no bigger than a baseball were bigger than a basketball. And both sides too.  Also the lips on the inside of all 4 fenders were badly rotted so we decided to replace them. I think if I had known how much work fiberglass fenders would be I would have fixed the old ones.  The box was in good shape but it had hundreds of little dings in it. We bought a new one. That was a simple bolt together operation. Some other problems we encountered were: a crack in the head-welded by local machine shop, layers and layers of paint which my wife diligently stripped off, of course the cab and frame were sandblasted and primed-the problem was that I let the truck sit too long without any attention and it got enough surface rust back that it had to be done again – and last but not least I painted the cab with acrylic enamel paint with no intention of sanding but mixed my paint too thick for the hardener and had massive orange peel. It took 3 days to sand it smooth and buff it out but it is a very nice result. It’s a good thing I had lots of paint on it. The only thing was now I had to sand and buff the rest of the truck also. It turned out much better than I could have imagined though.

I hope you enjoy the pictures. I’m very proud of this truck because except for the crack  in the head all the work was done by my wife and myself. I don’t know if I’m any smarter or not but I would be glad to answer any questions anyone might have.